New measures to encourage a more representative and inclusive Scottish film industry are being introduced from 1 April 2022, as Screen Scotland adopts the BFI Diversity Standards.

Designed in consultation with the film and TV sector, the BFI Diversity Standards – Screen Scotland will be piloted on all projects applying for Screen Scotland’s Film Development and Production Fund and its Film Festivals Fund during 2022. Following the pilot, the ambition is to see further roll out of the Standards across the full range of Screen Scotland’s film and TV funds from 2023, ensuring more inclusive practices and increased opportunities for people from all walks of life, to make and experience film.

“A truly representative screen sector reflects the whole of society, through films we fund, filmmakers, actors and crews who make them and audiences who watch them.

“Designed to guide both our own activities and the projects that we fund, the BFI Diversity Standards focus on disability, gender, race, age and sexual orientation (as they pertain to the Equality Act 2010) and also seek to ensure that people from lower socio-economic groups are better represented.

“Embedding the principles of equal opportunity across all decision making will help bring about real and lasting change needed to ensure true representation and make the screen industry in Scotland a more inclusive and attractive place to work.”

Jennifer Smith, Head of Inclusion at the BFI, said: “Having Screen Scotland adopt the Standards is a really important milestone and it has been great to work with them to get to this point. The Standards provide a baseline framework to instigate the sometimes difficult conversations around creative decisions and hiring practices which can make real differences. I look forward to seeing the outcomes of the pilot and where we can go from there.”

BFI and Screen Scotland aim to support filmmaker and festivals in adopting the BFI Diversity Standards. Initial information sessions are taking place as part of the industry programme at Glasgow Film Festival.

This support is underpinned by the development of Screen Scotland’s skills and talent development strategies which aim to open up opportunities to everyone across Scotland, regardless of their background or where they live, to ensure the Scottish industry has a strong and representative pipeline of talent to work on or lead projects.

2.During the pilot year the BFI Diversity Standards - Screen Scotland will be a part of the criteria for applications to Screen Scotland’s Film Development and Production Fund and Film Festivals Fund.

3.Following this initial pilot phase, Screen Scotland aims to implement the BFI Diversity Standards across other funds from 2023.

For Deaf BSL users, access our services head to contactscotland-bsl.org/deaf-bsl-users for more information.

Screen Scotland is driving the cultural, social and economic development of all aspects of the sector in Scotland through enhanced funding, services and support and backing from Scottish Government and The National Lottery.  Screen Scotland sits within Creative Scotland and works in partnership with Scottish Enterprise, Highlands and Islands Enterprise, Skills Development Scotland, Scottish Funding Council, working in close collaboration with the sector to ensure its success. screen.scot / Twitter / Instagram.

About the BFI Diversity Standards

The BFI Diversity Standards are an industry wide initiative for adoption by the film and television sector. They have already been embraced by BAFTA, Film4, BBC Films, BIFA (British Independent Film Awards), Screen Scotland and Paramount Studios. The Standards focus on disability, gender, race, age and sexual orientation (as they pertain to the Equality Act 2010) and also seek to ensure that people from socio-economic disadvantaged backgrounds and those from outside London and the South East are better represented. In addition, the BFI Diversity Standards guide both its own activities and the projects it funds.

The BFI is a cultural charity, a National Lottery distributor, and the UK’s lead organisation for film and the moving image.

Founded in 1933, the BFI is a registered charity governed by Royal Charter.

The BFI Board of Governors is chaired by Tim Richards. 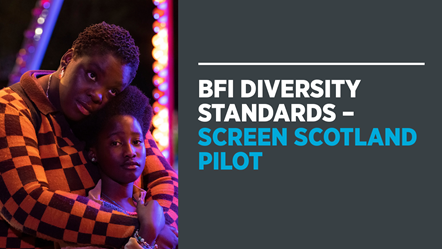